The robin chirps a warning: I’m in his territory.
I don’t leave so he flies down to investigate.
I wonder what he makes of me using a picker
to transfer sweet and cigarette wrappings from the ground
to a black sack. Relief this unnatural stuff
is gone or the robin equivalent of an eye-roll?
There’s nothing here he can nest with.
The picker clangs on something metal
and I drag it out from the shrubs for a better look:
a tea light holder designed to be hung like a lantern
and decorated with metal, white-painted butterflies.
The robin cocks his head, his eyes watch me
now he’s close enough for me to grab.
I get the wrappers: redundant, they’re just
dropped by people too lazy to use the bins,
too idle to think of consequences.
But this lantern took planning: someone
purposely brought it to the park, searched
for somewhere to hide it and dumped it
probably rearranging the shrubbery as cover.
I wonder why whoever it was didn’t use
their ingenuity to photograph it, stick it
on a boot sale app and earn a little extra
money instead. It must have been an unwanted
gift, the butterflies too frivolous,
the white too bright to fit a desired image,
‘lost’ a better explanation than ‘sold’.
It doesn’t fit here either: too small to house
a nest, too flimsy to support food and birds.
It goes in the litter bag. I move on.
The robin returns to his tree.

Emma Lee’s recent collection is “Ghosts in the Desert” (IDP, 2015). She was co-editor for “Over Land, Over Sea: poems for those seeking refuge” (Five Leaves, 2015). She reviews and blogs at http://emmalee1.wordpress.com

In Red and White

You could helter-skelter down their columns on a rug or tray,
pretend they’re giant sticks of rock in red and white –

slice thought their middles and you’d surely find
the names of places where they stand:
Strumble, Needles, Bardsey, Portland Bill.

In the wind you’d hear the thin bewildered sighs
of long-forgotten keepers drifting round
the eerie robot systems that transmit the beams;

men amazed that no-one has to trim or light the lamps.

The Man Who Invented the Fish Bowl

Did the man who invented the fish bowl
extend the patent to cover illustrations
in pulp sci-fi mags, a square-jawed
Buck McMacho, Hero of Mars type
striding across rock-edged vistas
of red dust, alien femmes fatale
(green of skin but still Miss Arizona
material) swooning in his wake

and did he wonder, the man who invented
the fish bowl, whether these illustrators
of the future before the future was fact
omitted oxygen tanks and tubes
and mouthpieces the better to accentuate
Buck McMacho’s rippling muscles
and the rigidity of his manly jawline

or did it puzzle him, the man who invented
the fish bowl, that Buck McMacho
would wear a sphere of blown glass
and not traverse the galaxy
with it three-quarters full of water,
two unimpressed goldfish for company?

Neil Fulwood lives and works in Nottingham. His hobbies include visiting inns and taverns of architectural interest. Some people confuse this with pub-crawling. Neil’s first collection, No Avoiding It, is published by Shoestring Press.

This row seems more serious – we have decided not to forgive.
I’m down here with the expensive bottle I was saving

for Christmas.  You’re upstairs, in bed, restlessly asleep, a frown
in your dreams.  I pull the cork and pour myself a full glass,

red as an open heart.  Those things we said, we meant – when hurt
we strike out like snarling strangers then crumble into remorse.

It’s commonplace. This time – another glass of wine – we didn’t
make things right,  bumped away from each other, bruised, sad,

your eyes rejecting mine like an awkward stranger.  A refill.  My pain
rearranges itself into rage.  I scavenge your selfish bones, pick your

arguments bare.  Guilt settles on me like a bad debt.  Reach for the
bottle, fill up the glass.  There’s a chasm between us, the rift grows wider

by the hour but I am moulded in stone and hard and cold and slow.  Your
familiar, gentle face is set for war.  More wine. I’m drowning wounds

in wine.  It stings like brine. I want you to wake up.  I want to want to
wrap my arms around your familiar feel, your smell, your skin.  But

I don’t.  Here in the dark, alone seems necessary.
The destroyer in me is out, the last glass spilt.

First Published in The Interpreter’s House

Lesley Quayle is a widely published, prizewinning poet, living in deepest, darkest Dorset. She’s also a folk/blues singer and co-organiser of a music club, wife of one, mother of four and grandma of three (and a half.)

The doorbell rings. A squelch of friendly boots
and insults brings him cake from the village shop.

Where cold spaghetti did for lunch, he casts
an artful tea towel on the pan for one,

then kicks aside his pile of laundry. Mustn’t trip
his neighbour, eyes far-focussed on the yard.

He smells of bubble bath, of mocha coffee
from a sachet that he hides from posher eyes.

Alone is how he likes it. If there’s ever wine
in the afternoon, that doesn’t mean he’s lonely.

Kathy Gee’s first collection – Book of Bones – was published by V. Press in May 2016:  http://vpresspoetry.blogspot.co.uk/p/book-of-bones.html. In the same year, she wrote the spoken word elements for a contemporary choral piece – http://suiteforthefallensoldier.com/ .

the valley trembles under this thin slip of a morning

Nick is from Yorkshire and would be a great deal more miserable if it weren’t for good whisky and strong coffee.

Like the name of some poor bog body
curled up into leather and bone
or a shlocky B-movie monster
that’s what I called him
whenever he boarded the train.
He’d sway to the rails’ curves
popping lager cans like grenades,
his mouth warped into a sickle,
his jaw always primed for a punch.
I invented stories of regret
at every sight of him, poured
whole histories of lucklessness
into his pitiable frame,
so when I saw him around town
it only added to the joke. His face
mooning up over sandwiches
in my favourite cafe, or out
after work, when I would spy him
patrolling the evening streets.
Oh that jaw, those furious eyes!
Perhaps, I should have stopped him
even once, taken him in my arms
holding tightly as he struggled
against the squeeze of healthy reality.
Who knows? I might have saved him,
and through such benevolence
found a way to redeem the world,
but I wasn’t doing so well myself.

Daniel Bennett was born in Shropshire and lives and works in London. His poems have been widely published, most recently in The Best New British and Irish Poets 2017 from Eyewear Books. He’s also the author of the novel, All the Dogs.

Our featured publication for November is Northern Lights by Harry Gallagher, published by Stairwell Books.

Northern Lights is a celebration of a world sculpted by industry and polished by grit now abandoned to archaeologists. Discover anew this tight close knit community as they were then and how they are now and of what they are truly capable of being. 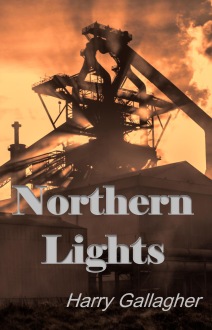 Cobbling over Hadrian’s trod,
going back, back, back
to river’s edge. Gulls idly
chatter with herons on bones
of conveyors, cranes, staithes
lodged in silt, water topped up
with ancient stevedore blood.

Ships playing pretend
that the old girl
is still thriving. Alive
with cries and roaring chains,
as virgin hulks slipaway
to Valparaiso or Cairo.

Who remembers you now, Mary Isabella?
Darling George, whose fingers straightened
your Sunday bonnet straws, no longer
parts the ivy on top of your headstone.

Taken at forty by the Lord at Church Pit;
not your children either,
cradled into the earth as babes,
tuberculosis’ little coughdrops.

All these sons and daughters
of Hartley Old Engine, West Farm,
being swallowed in death
by what took them in life.

Bones backfilling the hateful hollows
they themselves dug out, as the coaly
caverns take everything back beneath
a greening Northumberland churchyard.

No notion that they
are making memories
to last the rest
of their livelong days
(and why would they?)

No vision of the shadows
of lost waggonways,
nor the artists’ colony
that once coloured Bank Top.

No idea the middleage
spread men with children
(that they will surely become)
will look back on these nights
with salting eyes,
wondering where the years went.

They see only the depths
of the harboured sea,
holding their forevers
around them

When I was at school, perfecting
the fine art of disappearing;
blending into blackboards, coat pegs,
white lined tarmac and the bonding
to be had in inventing nicknames,
there you were. Ill fitting the backdrop;
a boy’s clothes not disguising
a voice and a manner which left you
no hiding place.

Sashaying in a hothouse
for the dragons it bred;
deliberately provoking
each beating you took.
Refusing to fit in with the rest,
who knew by instinct where
the invisible line was –
we picked it up and towed it.

Years later, long escaped,
I heard about you from my mum:
That Terence – he drowned in a canal, you know.
Well he was always a queer sort.

Harry Gallagher has been published by Interpreter’s House, Prole, Poets’ Republic, Rebel Poetry and many others. He has 3 pamphlets to his name and now this first full collection from Stairwell Books. He runs the Tyneside Poetry Society stanza group. Website: https://harrygallagherpoet.wordpress.com

Northern Lights (Stairwell Books, 2017) can be purchased from: http://www.stairwellbooks.co.uk/html/collections.html#NorthernLights

Mist unfolds from your slopes’
envelopes of valley and sky.
Above winter peaks, the black script
of trees and bird flight.

My faltering steps
and words overshadowed
by the wind’s stone-swept stutters,
lost in crackles of fern and bracken.

un-landscaped
yet shaping the knit of my bones.
Distilled from your hills’ daily moods
and light filtered through leaves,

a sense of peace, essence of me.
It should be easy – to keep
in touch, write home with love,
remember,

something hanging –
a raindrop, a branch, a ledge
at the edge, in hope
of a steady handhold.