Our featured publication for December is Oysterlight by Cheryl Pearson, published by Pindrop Press.

“In her poem ‘Girl as Star’, Cheryl Pearson writes about ‘a girl held together/by her own gravity’ and it seems to me that this book is held together by its own beautiful and finely-crafted gravity. The poems are built with care and love and with a deep conviction that language not only helps us to survive, it helps us to dance.” Ian McMillan

“From interviews with angels to glimpses of selkies, Oysterlight is a magical collection which makes the familiar strange. Cheryl Pearson guides us through landscapes where ‘ghosts are pressed in the print of our boots’. Enchanting, enchanted.” Helen Mort 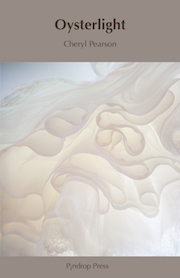 Pre-dawn I wake, and your breathing finds me,
places me into this bed, this room, this
sudden not-quite-morning. You won’t mind me
folding into your side, so I fold; kiss

the tangled mat of hair on your bent arm;
smell the yeasty smell which makes your skin taste
of wheat. Once, in Wales, we went to a farm
where a similar smell rose from the waste

of horses – a homely smell, redolent
of good earth, heat, sweat, physical labour.
I tucked myself into you, nonchalant.
Breathed you in as I do now, bed-neighbour

on this dark dawn, as the clock enforces
order and you dream – perhaps of horses.

Things That Can Be Broken

The road’s back, under boots and drills.
A bad tooth on a peach-pit.
Silences. Mornings. Sleeping-spells.
Stars shivered up in a kicked bucket.

A sick fingernail, ridged with infection.
Mirrors, and windows. A weak lock.
Sandcastle-keeps when the sea returns.
The braid of a fish-spine on a cutting block.

A Christmas wishbone in a pincer-grip.
A voice under fathoms of bad news.
A soft, dropped apple, coughing its pips.
A slow snail under careless shoes.

A fast. A heart. A sapling split
by axes, lightning, rot, disease.
A talcumed grandmother’s chalky hip.
Ice under boot-heels in a winter freeze.

A confidence. A promise. A fever. A skull.
A jilted bride, glittering like dew.
A horse’s leg on a difficult hurdle.
Bread, and circles. Me. You.

Joan Of Arc Waits For The Flames

They burned her horse first, made her watch
as they hustled his gleaming furniture into flame.
His tail, his mane, gone in a shock of sparks.
She hadn’t known a horse could scream like that.
Hadn’t known that pain came in layers, like an onion –
as one was stripped away, another, larger, moulded on the last,
gleamed underneath, brought burning water from her eyes.
When the fire reached his centre, she felt her own heart catch.
How soft then seemed the plates of her armour. How thin her skin,
through which grief flooded like sunlight through glass.
The thought of her own death, so close she could taste it –
fat-spit, lung-burn, sooted rib. Then out of her mind: the rope
of her Voice. Think cold as the flames peel away from your bones.
As her wrists were tied. As the torch-flame leaped. As her hems
and ankles lightened. Think snowmelt. Think
stalactite. Think ice-storms. Think stone.

Let my blood run backwards twenty-four months
to the source of this, the source of us. My salmon-cells leaping
back to the dark. Let my heart collapse softly
on the sack of itself, a balloon expelling you
breath by breath. Let my neck forget the syllables you left
with tongue and teeth; let my hands unlearn held
and remember release. Let my bones come loose
from the shape tucked into the sheets at night,
let the moon print newly minted light along my spine.
Let me rock shut like an oyster over the pearl
of what this has become. Which is everything. The world
I cannot conceive of losing. Let me go back further, just in case.
Stars, carbon. A universe of blank space.

Pre-Dawn and Things That Can Be Broken were both previously published in the Best of Manchester Poets anthologies (Puppywolf Press).

Cheryl Pearson lives in Manchester, and has been published widely in the UK and abroad. She won the Torbay Poetry Competition 2017 and the Cheshire Prize for Literature 2016. She has also been nominated for a Pushcart Prize. Her first collection, “Oysterlight”, is available now.