Our featured publication for April is How To Parallel Park by James Davey, published by V. Press.

“Stark, poised, precisely observed, James Davey’s poetry well demonstrates how much more emotion is conveyed the greater the restraint. The poems also exhibit an impressive musicality, from the lilting to the percussive. Each poem rewards rereading.” Carrie Etter”

“These poems by James Davey are vivid, articulate and entertaining. They evoke the peculiar intensity of childhood fears, the angst of adolescence, the tremors of first loves. Davey has a gift for clear-eyed dramatic presentation, as well as an often-humorous take on human condition and a true empathy for the various characters he comes across, be they ‘pyroman’ a down-and-out who accumulates trash to burn, the terrified child taken on a hunting trip, or the lover discovering the ‘colours’ of a girlfriend. This is a promising and well-wrought debut.” Amy Wack

“Davey’s work is confident, crafted, elegant in its simplicity. The poems are full of moments of recognition for the reader, subtle emotive power balancing understated humour. I trust him to show me something worth seeing with no fluff around the substance.” Anna Freeman 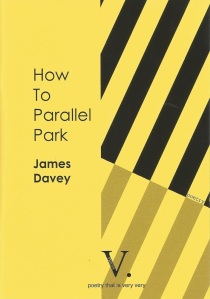 We often see him through the playground railings,
arms loaded with odds and ends rescued from scrap heaps

and rubbish tips: a floral lampshade, three-legged chair,
and hanging round his neck, pairs of tatty trainers

tied together by their laces. He shuffles past in his grubby mac,
a scabby dog yapping round his ankles

and we rush to taunt him – Filcher! Filcher! –
but never cause a flicker

in his thousand-yard stare.
Sometimes we see him through our classroom windows

and stand on our chairs for a better look
at what he’s salvaged, each time his treasures more bizarre.

One day he stutters past dragging a soiled mattress,
the next carrying a child’s plastic kite.

On a tinder-dry morning in July, a pillar of black smoke
rolls above his rooftop across the street.

The playground freezes – our heads back, mouths wide open,
the smell of burning plastic heaving toward us,

the crack and burst of flames merging with the long high
whine of sirens in the distance.

Six months later I pass him on the street, his soot-grimed face
aglow, carrying a wooden crate, a cricket bat, a headless doll.

Perform a U-turn when possible, says the woman
in my sat-nav – I call her Jane.
So I swing across the road
in one practised motion,
the sweep of my headlights
igniting the fine rain needling the pavement.
Bottles of Cab-sav, cans of Carlsberg,
and a kaleidoscope of Alcopops
rattle in the boot of my Fiat Panda
as Jane directs me to my next customer.
Drive three hundred yards, then turn left.
Only the restless and the homeless
wander the streets at this hour.
A girl collecting cardboard boxes outside Asda,
plastic bags wrapped around her shoes,
pulls up her hood and takes a swig
from a plastic bottle as I drive past.
At the next roundabout, take the second exit,
says Jane – and as she speaks
she appears in the passenger seat,
plump with her third child,
her hair cut shorter than normally – it suits.
She tells me the latest on the children
and her husband, Derek, an accountant
with a confident moustache,
describes their new house in Hampstead
with a gravel driveway and bay windows.
The baby is kicking; last week their cat
burned its tail in the toaster.
I can smell her perfume, citrus bloom.
The hairs rise on my arm.
In two hundred yards, turn right, she says.
You have reached your destination.
I pull into an unlit cul-de- sac,
park between a wheel-less car
propped up by four small pillars of bricks
and a soiled mattress dumped by a fence.
A slice of light splits the darkness
as someone inches open their front door.
A sallow face peeks out from behind the chain.
I’m waved forward.
Perform a U-turn when possible, says Jane.

How to Parallel Park

My instructor takes me to a country lane
to practise my parallel parking.

I slip the stick into reverse and start backing up
into a gap between two parked cars.

I take it steady, work my clutch control.
I rotate the wheel clockwise through both hands.

I check my mirrors. Listen to the engine’s rev
ticking over nicely.

notice a bare foot pressed against its window;
a bare arse bobbing up and down –

a muffled chorus of love-moans bluing the air.
My instructor insists we abandon the manoeuvre.

I restart my stalled engine. I pull away nice and slow,
making sure to check my mirrors.

James Davey grew up in Bristol and currently lectures in Creative Writing at Bath Spa University. Before returning to the U.K. in 2014, he spent three years working in Catania, Sicily, as an English-language teacher. His poetry has previously appeared in journals including Poetry Wales, New Welsh Reader, Stand, The Warwick Review, Ambit, New Walk, Agenda, and The Interpreter’s House. How to Parallel Park is his debut poetry pamphlet.

How To Parallel Park is available to buy from the V. Press website, here.